By Ana Olivia A. Tirona, Searcher

DOMESTIC TRADE ACTIVITY rebounded slightly in the second quarter from a year earlier, although it was still below the value of goods traded locally in 2019, according to data from the Philippine Statistics Authority (PSA).

Preliminary results from PSA’s ‘Flow of Goods in the Philippines’ report showed the value of goods traded in the second quarter increased 24.5% year-on-year to 141.77 billion pesos from 113.84 billion. pesos at the same time last year, when it had fallen. by 46% over one year.

Yet this figure was lower than the 211.01 billion peso value of domestic trade in the second quarter of 2019 before the coronavirus disease 2019 (COVID-19) pandemic which has limited economic activity since the Iffirst quarter of last year.

Similarly, the volume of these goods traded increased by 30.1% to 3.74 million tons against 2.88 million tons previously. Similar to trade value, volume has also been signiIfslightly lower than the 8.11 million tonnes recorded in the second quarter of 2019.

Six of the 10 product categories tracked by the PSA showed year-over-year growth in trade value. Machinery and transport equipment – ​​which accounted for the largest share of trade by value at 30.9% – rose 106.3% to 43.83 billion pesos. Its trade volume also jumped with a growth of 92.9% to 429,583 tonnes.

The Eastern Visayas were the main source of raw materials in the second quarter, with outflows amounting to 28.87 billion pesos. It had a domestic trade surplus of 15.65 billion pesos, the largest among the six regions whose exports outnumbered imports.

Meanwhile, Northern Mindanao was the top commodity destination with total inflows reaching 40.35 billion pesos. It posted the largest trade ofIfcit among the 10 regions with 12.59 billion pesos.

In an email, UnionBank of the Philippines, Inc. Chief Economist Ruben Carlo O. Asuncion attributed the second-quarter results to “the momentum coming from the [April lockdown].”

“There was a recovery in manufacturing and construction in 2Q21. This was also evident with the recovery in imports in said quarter,” he added.

As a reminder, Metro Manila, Cavite, Laguna and Rizal were placed under enhanced community quarantine (ECQ) from March 29 to April 11 as the government tried to slow the surge in COVID-19 cases. This was later eased by a more forgiving modified CQ from April 12-30.

The economy has been under varying degrees of quarantine since March 2020.

“We see the economy rebounding to 4.9% [GDP] in 2021 and this is an underperformance due to continued lockdowns and difficult challenges in controlling the spread of the virus,” Asuncion said when asked what the latest trade numbers domestic mean for this year’s recovery prospects.

Asuncion sees domestic trade “sliding to the positive side of year-over-year growth” but that lingering threats such as the emergence of the more infectious Delta COVID-19 variant “would still be a drag to domestic trade in the future. 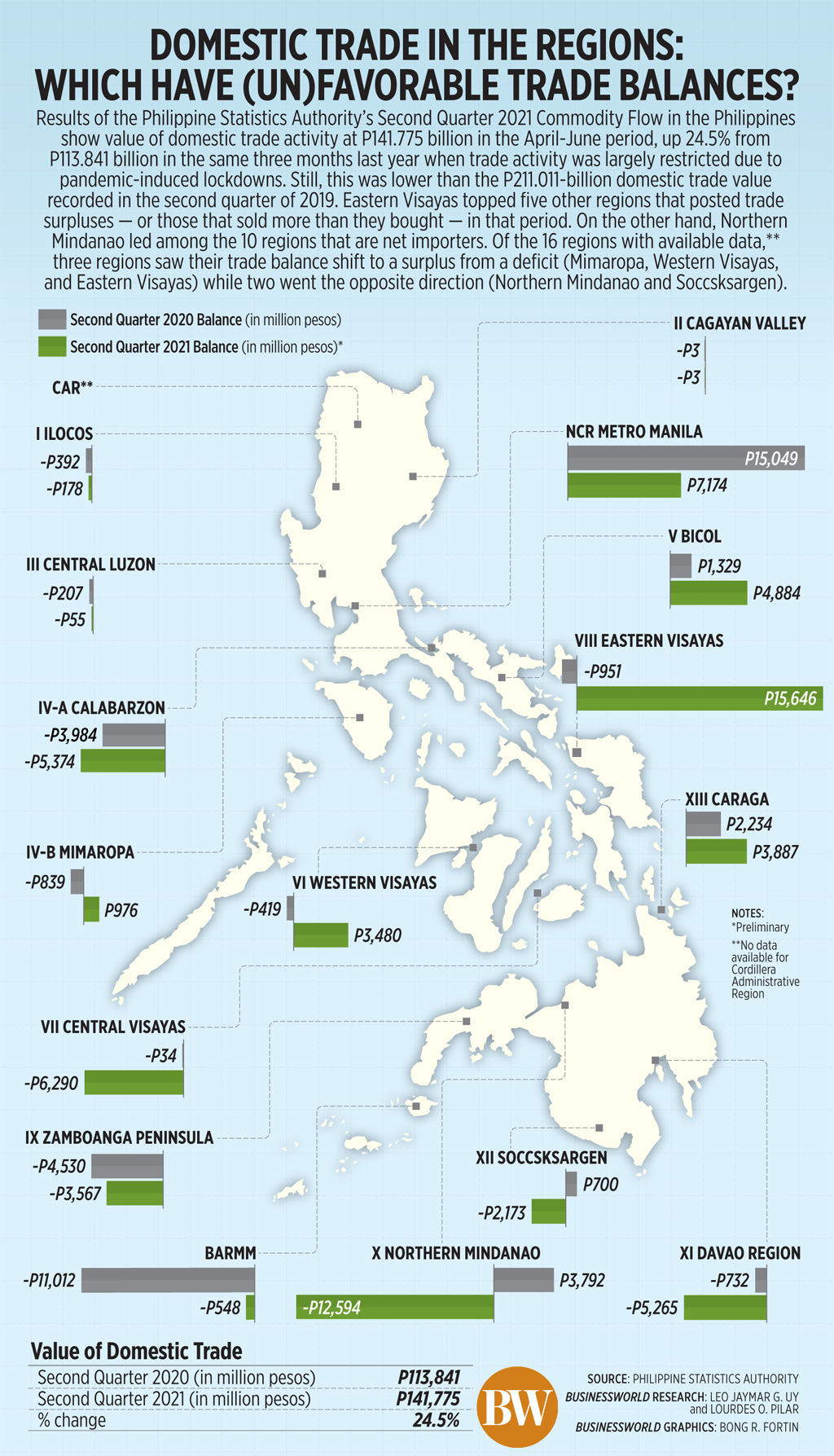