In December 2020, a ship was exported, worth 950 million euros. The previous year also in December, a ship with almost the same value was exported.

Global evolution, in millions of euros (figures for 2020 are based on preliminary statistics)

Figure 4. Finland’s annual exports, imports and trade balance between 2005 and 2020, in billions of euros

Figure 7. Change in the value of Finnish exports to Germany, the Netherlands, the United States, Russia, China, the United Kingdom and Sweden 2015-2020, in percentage.

Figure 8. Change in the value of Finnish imports from Germany, the Netherlands, the United States, Russia, China, the United Kingdom and Sweden 2015-2020, in percentage.

The EU’s share in Finland’s international merchandise trade was 57.1 percent

Evolution of EU exports in 2020

Total merchandise exports of the EU27 fell by 9.2 percent between January and November 2020. Finland’s exports fell by 14 percent in the corresponding period. Only one EU member state, Ireland, increased its exports by 4%. The decline in Finnish exports was the third highest among EU countries in January-November 2020. 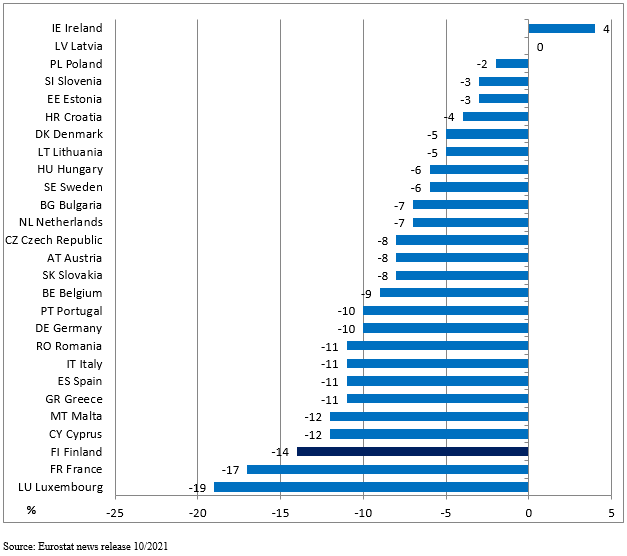