The trade war continues to rage in the shadow of the headline-grabbing supply chain disruptions. The tariffs are still in place and are unlikely to go anywhere despite the change of administration in the United States.

As increased exports from the United States to China under the Phase 1 agreement increased volumes for tanker and dry bulk transport, containerized imports to the United States have shifted from China to other countries in the region. Despite an increase in exports, the commitments made in the Phase One Agreement are far away and unlikely to be met, the consequences of which are not clearly defined. 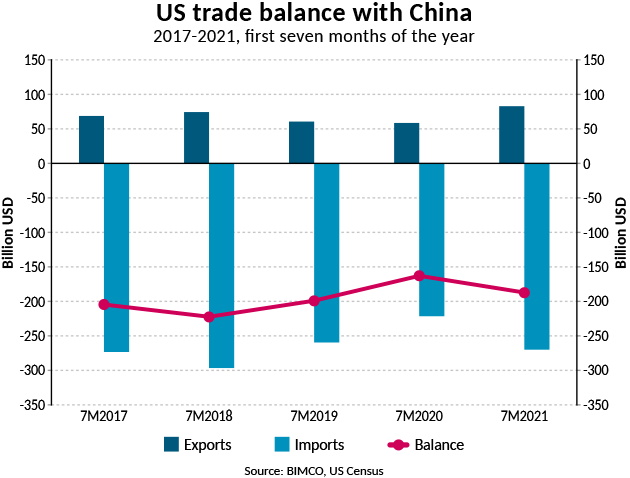 Partly attributable to the Phase 1 agreement, which boosted U.S. exports to China and repaired some of the damage done to trade among the world’s largest economies in the early years of the trade war, U.S. exports to China grew at a faster rate than those towards the rest of the world. In the first seven months of this year, U.S. exports to China grew 40.6 percent, nearly double the 22.2 percent export growth rate recorded in the same period to the rest of the world. The strongest growth has come in energy and agricultural products, with US containerized cargo exports suffering both from the slow recovery in the manufacturing sector and from problems with exporting goods.

The contrast between the two is even more striking when comparing the exports so far this year with those of the first seven months of 2019: exports to China are up 34.7%, while those to the rest of the world increased by only 0.2%. This has led China to talk about a greater share of total US exports than in 2019, and has actually returned to its pre-trade war level. In the first seven months of 2021, the United States sent 8.7% of its exports to China, slightly above the 8.5% in the same period in 2017.

For maritime trade, the three main maritime sectors have benefited from higher exports on this long-haul trade because they are all covered by at least one of the categories of goods covered by the agreement: manufactured, agricultural and energy products. The biggest winners are tankers and dry bulk transport. Additional container volumes are added on the return trans-Pacific voyage.

The deal’s most important product for tanker shipping is crude oil, with 7.6 million tonnes exported so far this year, just under 10% of total U.S. crude oil exports. by sea. Although this, in terms of volume, represents an increase from the first seven months of 2017 and shows a marked improvement over the second half of 2018 and the whole of 2019 in which there were many months without imports, China has yet to regain the market share it held before the trade war when the country accounted for more than a fifth of US crude oil exports. 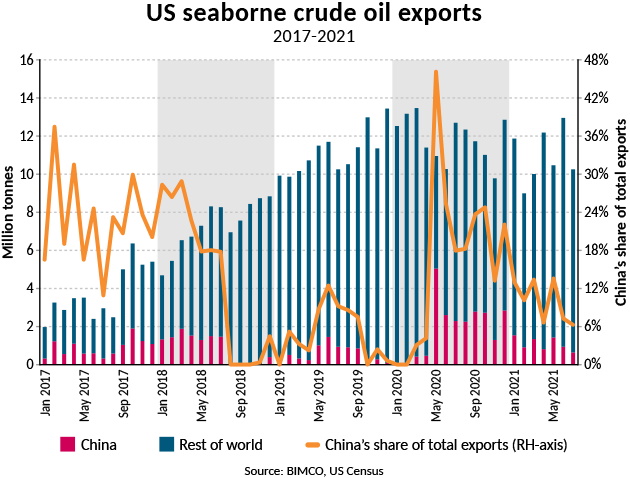 Corn is the biggest volume factor for dry bulk shipping

Soybeans are another of the important dry bulk commodities included in the deal. As the export season from the United States accelerates, this provides support to the mid-size bulk carriers involved in this trade. However, BIMCO does not expect soybean exports this season to match the record volumes of the 2020/2021 season.

The agreement also includes a long list of manufactures, and exports of these products have grown at the slowest rate of the three product groups. This is because the US manufacturing sector is recovering from the pandemic at a slower pace than other sectors. Compared to the first seven months of 2020, the value of exports of manufactured goods included in the agreement is up 21.3%.

“Despite the higher value and volumes, this year’s exports still fall short of the commitments made in the deal. In fact, it seems increasingly unlikely that the targets will be met by the end of the year. However, even if the agreement’s goals are not met, increased U.S. exports to China have added volumes and significant tonne-mile demand to a struggling tanker shipping industry, while stimulating the solid dry bulk market ”, says Peter Sand, chief shipping analyst at BIMCO.

In the first seven months of this year, exports of goods covered by the Phase 1 agreement reached 21.3% of commitments made for the full year. As in 2020, agricultural products are closest to their target, although at 30.4% they are still far from the target.

Tariffs have capped growth in imports from China

In the first seven months of this year, there was strong growth in containerized imports by the United States from the region, as evidenced by congestion on trans-Pacific trade, but tariffs have left China a much lower growth rate than its neighbors.

Containerized imports from countries in the Far East and Southeast Asia increased by 18.3% between the first seven months of 2017 and the same period this year, reaching 63.3 million tonnes. In contrast, Chinese imports only represent a growth of 2.8% compared to 2017, increasing by just under 1 million tonnes to 36.1 million. Volumes from other countries in the region grew much faster, up 48.5%, which at 27.3 million tonnes is however still eclipsed by China.

Compared to the first seven months of last year, growth is much more evenly distributed between China and the rest of the region, with total containerized volumes up 26.7%, following the sharp drop in imports. early last year. During this period, China recorded a growth of 29.6% against a growth of 23.1% of other countries in the region.

The strongest growth comes from Cambodia, Burma and Vietnam, the latter consolidating its second place behind China. The United States has imported 7.3 million tonnes of containerized cargo from Vietnam so far this year.

“Even before the pandemic prompted discussions about supply chain resilience, US importers had adjusted to the changing geopolitical situation, China’s neighbors, rather than US manufacturers,” becoming the biggest winners. There are, however, still huge volumes of goods imported from China despite the higher applied tariffs paid by US consumers. While originally this could have avoided being passed on to consumers, it may now be inevitable as higher supply chain costs reduce margins even further, ”says Sand.
Source: BIMCO, by Peter Sand, Chief Shipping Analyst