UK balance of trade for all dairy products[1] was negative in volume in 2021, after two years of slight surplus[2]. Including shipments of unprocessed milk, there was a shortfall of 68,000 tonnes in 2021, compared to a surplus of 53,000 tonnes in 2020. The ongoing pandemic continued to disrupt domestic and international markets in 2021. In addition , our exit from the EU in early 2021 brought new export regulations, leading to further disruption, while import regulations were postponed.

Apart from fluid milk, yogurt contributed the most to the transition from a surplus to a deficit. The yoghurt trade deficit increased, due to lower exports and higher imports compared to 2020. In addition, cream fell back into a slight trade deficit in 2021, after being in surplus in 2020.

Powdered milks (SMP and WMP) maintained a trade surplus, but it was lower than in 2020. This was due to lower exports, especially to the EU, which were likely hampered by post regulations. – leaving the EU.

On a more positive note, the volume trade balances of butter, cheese and condensed milk have all improved, with smaller trade deficits in 2021 than in 2020. Cheese saw the most notable improvement, reducing the trade deficit of 49,000 tons. Cheese imports and exports were down from 2020, but imports were down more. This was likely due to the restaurant industry still struggling with closures and low demand throughout the year.

The trade deficit in value is improving

In value terms, the United Kingdom remained in a trade deficit for dairy products, but this has narrowed. The trade deficit stood at £1.04 in 2021, which is £87m less than in 2020. While the total value of exports fell, the value of imports fell more significantly, improving the position net sales for 2021. 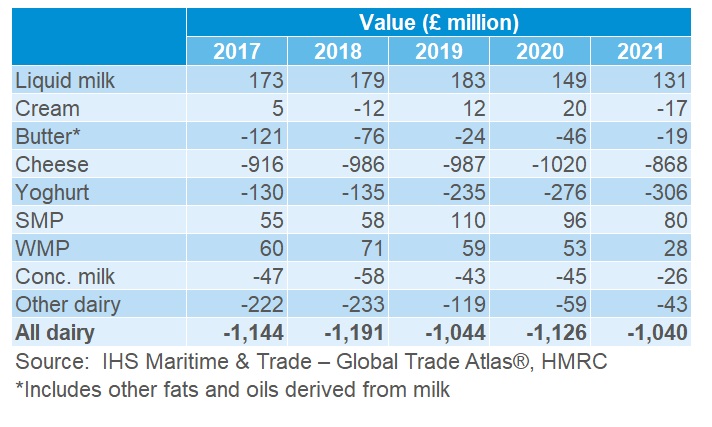 [2] Note that all historical data has been revised by the source since the March 2020 trade balance calculation, but overall trends have not changed.