The EU receives over 95% of UK sheepmeat exports and is therefore the main driver of the year-on-year increase, receiving almost 6,700 tonnes in April, up 45% (+2 000 tons) compared to last year. In 2021, high lamb prices in the UK caused us to lose our competitiveness in the EU market and therefore exports were significantly lower than in recent years. However, in 2022 UK lamb is at a reduced price compared to the main producers on the continent and therefore exports are strong, also supported by increased domestic production. France took in over 3,600 tonnes of British sheepmeat in April, more than half of the EU’s total volume and an annual increase of 60% (+1,400 tonnes). Some exporters now find it preferable to channel exports destined for the whole of the EU through France, so not all exports to France are necessarily destined for the French market itself.

Imports fresh and frozen mutton in the UK totaled 6,232 tonnes in April, down 11% (-750 tonnes) from March but up 43% (+1,900 tonnes) from March. ‘last year. Imports in 2021 were significantly lower than in previous years due to a combination of a reduced export market, meaning more domestic products were available domestically, and shipping difficulties with a lack of container availability and steep cost increases.

New Zealand still dominates UK sheepmeat imports with over 65% (4,000 tonnes) of UK imports from the country, but this market share is declining year on year. Imports from Australia appear to be increasing, accounting for 19% (1,200 tonnes) of UK sheepmeat imports in April 2022, up from 8% in 2019, this is before the deal came into force of free trade, due later this year. Growth in imports from the EU was driven by increased imports from Ireland. Ireland sent 750 tonnes of sheep meat to the UK in April 2022, an increase of almost 600 tonnes on last year. 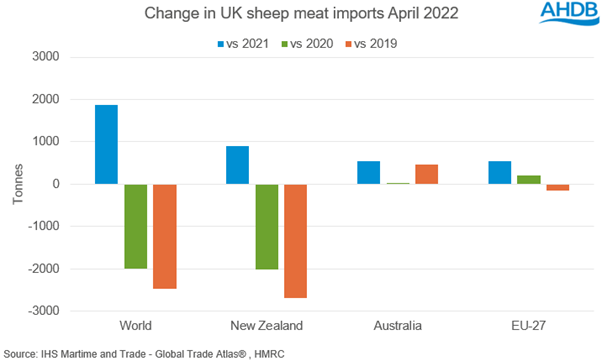 Overall, sheepmeat exports exceed imports with year-to-date volumes of 24,400 tonnes exported (25% annual increase) compared to 22,300 tonnes imported (9% annual decrease). We expect this trend to continue in 2022, not only because production is higher in the autumn, but as the increase in annual production means there is a good supply of British lamb available for the trade.